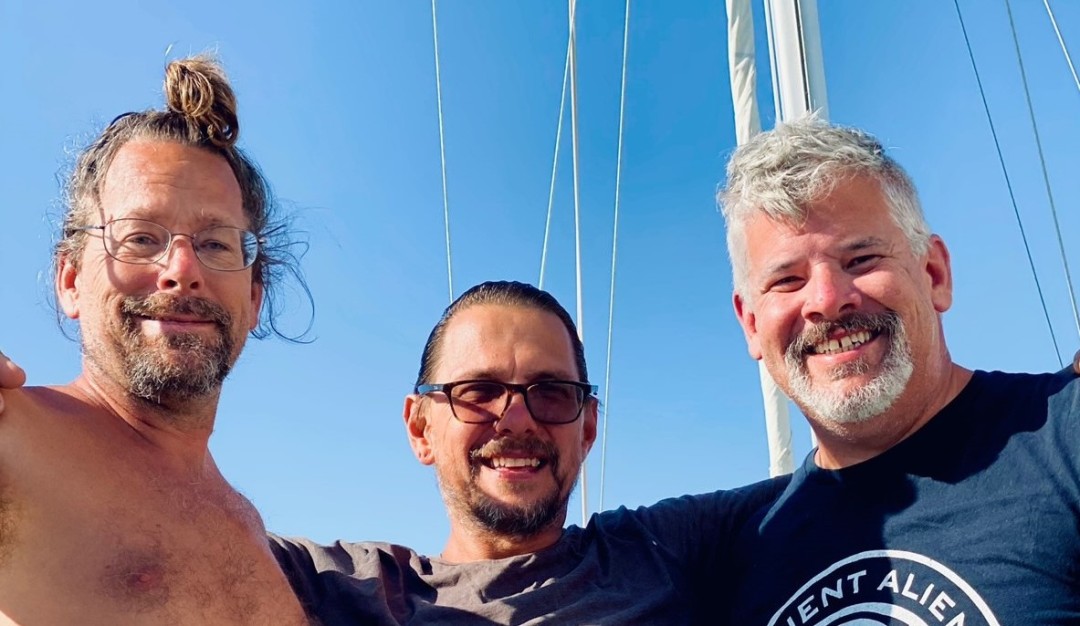 Well, it happened; we crossed an ocean. When the world is on lockdown and everyone is supposed to be “social distancing,” what do you do? You take it to the next level and join two complete strangers for a few weeks at sea aboard a 41-foot sailboat. That’s right, this is our brand of crazy. And this is our story.

The Introductions — Other than a couple Zoom meetings to make sure we all felt comfortable, our first moment together was in Hilo, Hawaii on the afternoon of Thurs., Aug.27, 2020. After Jim met me at the airport, he and I (Patrik) arrived by dinghy along Akela’s starboard quarter, and Craig jumped up for a warm welcome. Sometimes you just get a feeling everything is going to work out, and this was one of those times. There’s only a certain type of person who is drawn to this sort of adventure, so we already knew we all spoke the same language.

The Departure — We raised the anchor shortly after noon on Sat., Aug.29, and for the next six days we sailed due north out of Hilo, Hawaii. Yes — north. Many people don’t realize it is virtually impossible to sail directly to California from Hawaii due to the North Pacific High — an ever-present high pressure system that lives in the North Pacific Ocean.

The Wrong Direction — So after six days, we finally tacked for the first time, and after becoming accustomed to the way we move around the boat heeled over on a starboard tack, now we re-learn everything for a port tack. Needless to say, we were happy to be making eastward progress finally, however slight. It was a long and slow arc just barely beginning to make our turn toward North America. Four days later, and we actually turned more directly to the east, and that was an exciting and long-awaited event. Actually pointing in the direction of our destination — yippeee!!

The Sailing — Our best daily mileage covered was 144 nm (nautical miles), but most were between 100 and 120 nm, meaning we sailed at a speed of mostly 4.5-5 knots (nm/hour). Not exactly a race, but we were comfortable, happy, and getting along great, so what’s the rush? We were fortunate that the N.Pacific High was actually behaving in a very unusual way, which created a shortcut of irregular winds that enabled us to sail pretty much directly toward California long before we had expected would be possible.

The Fish — That first 7-10 days out, we caught many Dorado, or Mahi Mahi, and took it as a sign that we would be well-stocked in the fish department for the entire journey, but for some reason the fishing fell off after that. We had a dry spell that lasted over a week, and broke that spell by catching a skipjack tuna, which is actually related to mackerel, but everyone calls them tuna. They are that deep and meaty red like Ahi, so it was a great way to break the dry spell. It wasn’t that large, but it provided three meals for the three of us over the following day and a half, so we had zero complaints. Jim proved to be most talented in the galley, and as we rotated the cooking responsibility daily, Jim’s day was always greeted with enthusiasm and a bit of Pavlovian salivating. Among the best meals: Jim’s Fish Burgers, Craig’s Fish Stew, and Patrik’s Ceviche or Poisson Cru.

The Entertainment — After about a week, we added the assigned duty of “Cruse Director” who would be responsible for group entertainment for the day, and this role rotated between us daily, just like the chef du jour and quartermaster roles. Entertainment favorites included a couple card games like “bullshit;” “crazy crazy crazy eights;” a Farkle derivative game called “Fill or Bust;” and then there were multiple versions of Charades and Pictionary, all of which brought us lots of favorite moments; just ask any of us about “The Kinks” or “10,000 Maniacs” or “Led Zepelin” … we couldn’t get enough of the impromptu games. In addition to games, other entertainment included writing our own sailing chanty, drawing our favorite moment of the voyage, and singing.

The Artwork — Craig took an ordinary wind-vane sail (two of them, actually) and created art that I hope will live aboard Akela for many years to come. The first image depicted “Cap’n Bill” — the Monitor Wind Vane’s namesake, and on the flip-side, the “Hilo Hula Chick” who seemed to be sending us off from Hawaii for a safe passage. Craig’s additional art might one day be literally found on a distant shore: he created the artwork and message for our “Message In A Bottle” that we sealed and tossed into the Pacific around halfway through our journey. And on draw-your-favorite-moment day, he drew the fan favorite: depicting Jim looking over his shoulder only to find Craig’s GoPro pointed at him while peeing overboard, and also depicted the sailfish or marlin that got away (we didn’t get a close enough look), but in the artwork the fish was happily quoted saying “Not Today” seemingly at the moment he freed himself from our hook.

The Landfall — Right now, it is the eve of our landfall in San Diego, and there are mixed emotions as we draw this adventure to a close. Actually, it is exactly 4:30 am, so it is the morning of our expected landfall in San Diego which should be in about twelve hours. Today is Thursday, Sept. 24, 2020, so exactly four weeks since the day I first laid eyes on Jim, Craig, and Akela. The seas have turned from that amazing and bottomless deep blue, to the near-shore green; we’re in the wind shadow created south of Point Conception and around the Channel Islands; and we are currently motoring along because the wind is non existent. We spotted land for the first time in 26 days late in the afternoon — San Clemente Island, where there were active military exercises, so we had a visit from two helicopters who swooped right in on us, circling for a few minutes, and obviously decided we were just three nut-jobs out in the middle of nowhere for fun rather than any conceivable threat to anyone other than ourselves. They zoomed back over to their patrol area closer to the missile operations and we could see them patrolling the horizon for hours.

The Reflecting — Suffice it to say this has been a great experience, and will be remembered for the rest of our lives. I hope and expect to cross paths with these two again in some way, and maybe we’ll even pull up this blog post to spark some memories and facilitate the reminiscing. For “Future Jim, Craig, and Patrik” — thanks for making it happen, and may you and everyone who made it though this lengthy post continue to be inspired by new horizons, fair winds, and following seas. Peace.